Introduction
Analysis of the cylinder pressure waveform on a gasoline engine makes it possible to determine the proper synchronization between the crankshaft and the camshafts. Measurement and comparison of cylinder pressure values ​​at certain points provides real-time data that can be very helpful in determining engine health. The pressure at the Top Dead Center (TDC) on a running straight four-cylinder engine fluctuates between about 65 and 90 psi. Smaller readings than these ​​typically indicate serious mechanical defects in the cylinder tested, and the larger readings typically mean extra air is entering the cylinder or that the engine is under heavy load.
During the intake stroke, cylinder pressure is reduced to a point lower than the pressure in the intake manifold. During the exhaust stroke, the pressure in the cylinder should not exceed atmospheric pressure. If it does, look for clogging of the exhaust ports, reduced exhaust valve lift, or restricted exhaust.
Distinctive features when observing the measured waveform
Cylinder pressure waveform also allows you to collect the following important pieces of data:
- Connecting an inductive probe to the cylinder in question on one channel and a pressure sensor on the second channel in that cylinder will provide a more accurate indication of the spark event timing in relation to TDC than is possible using the scan tool data stream. If there is a large discrepancy between the two values, it is good to check the crankshaft trigger wheel for proper indexing, since the ignition is triggered based on input from the crank sensor. 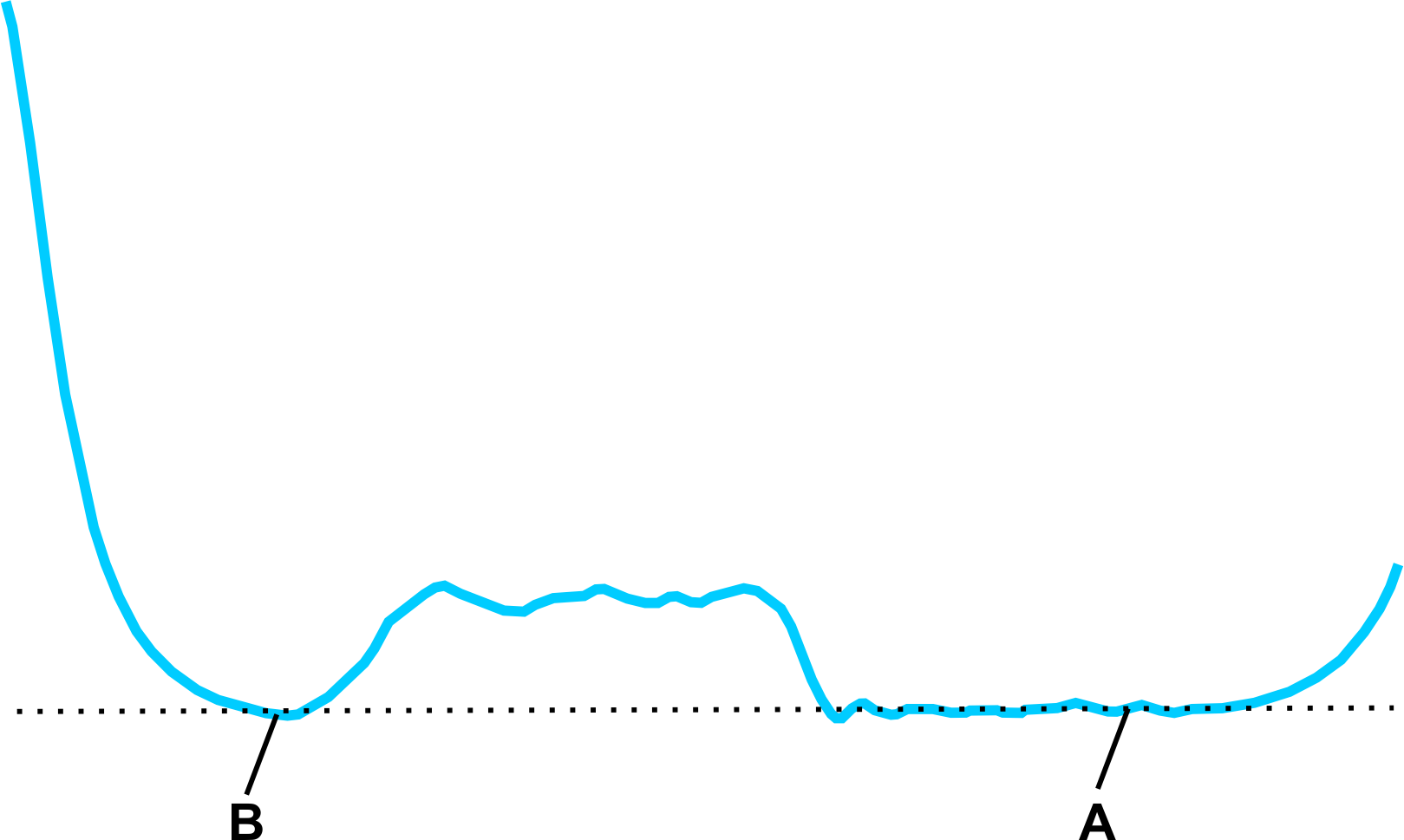 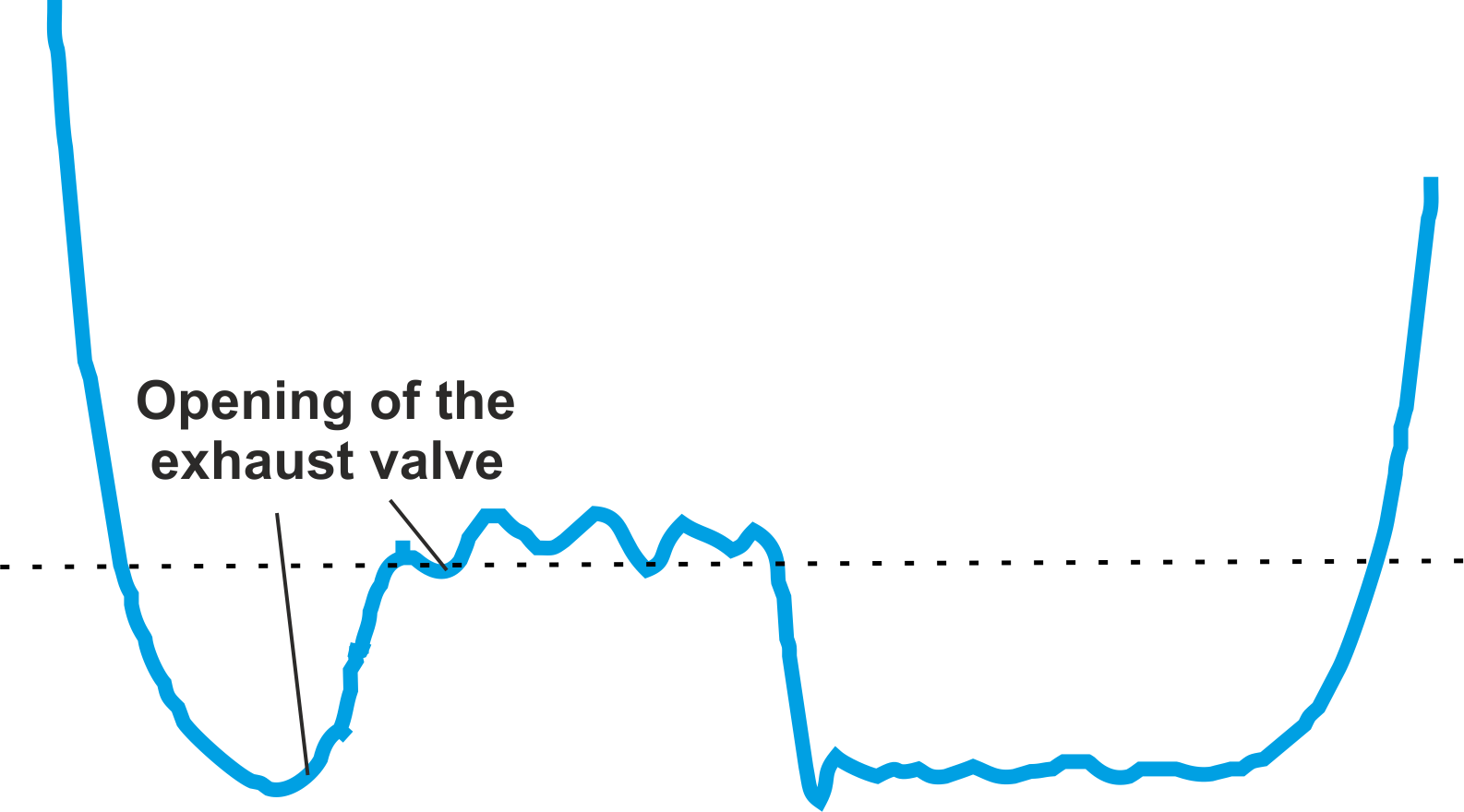 - Intake vacuum can be detected using this waveform. The average value of the vacuum in the intake manifold for the upright engine, must be about 8-9 psi.

- Timing belt issues can be detected by comparing valve action from frame to frame.
In the overlap window (at 360 degrees) of the intake and exhaust valves, watch for changes from frame to frame with the engine idling. If you see it, suspect a loose timing belt.

Specific points and sections in the cylinder pressure waveform
To better understand the big picture, the waveform screen can be numbered according to the firing order throughout the 720 degrees of engine cycle, even though only one cylinder is being checked for pressure.

To perform a diagnostics of the engine mechanical condition by the pressure graph in the cylinder, it is necessary to:

- put the pressure sensor in place of the spark plug on the cylinder which you want to diagnose.

- attach a spark tester or other method to the disconnected high voltage lead so as not to damage the ignition system;

- apply power to the pressure sensor by plugging the red and black cables to the corresponding battery terminals (or make sure your sensor has a good 9v battery);

- connect the pressure sensor signal cable to the oscilloscope input;

- the engine must be preheated to operating temperature and idling;

- Measurement time should not exceed 2-3 minutes to keep the pressure sensor temperature below 70 degrees. 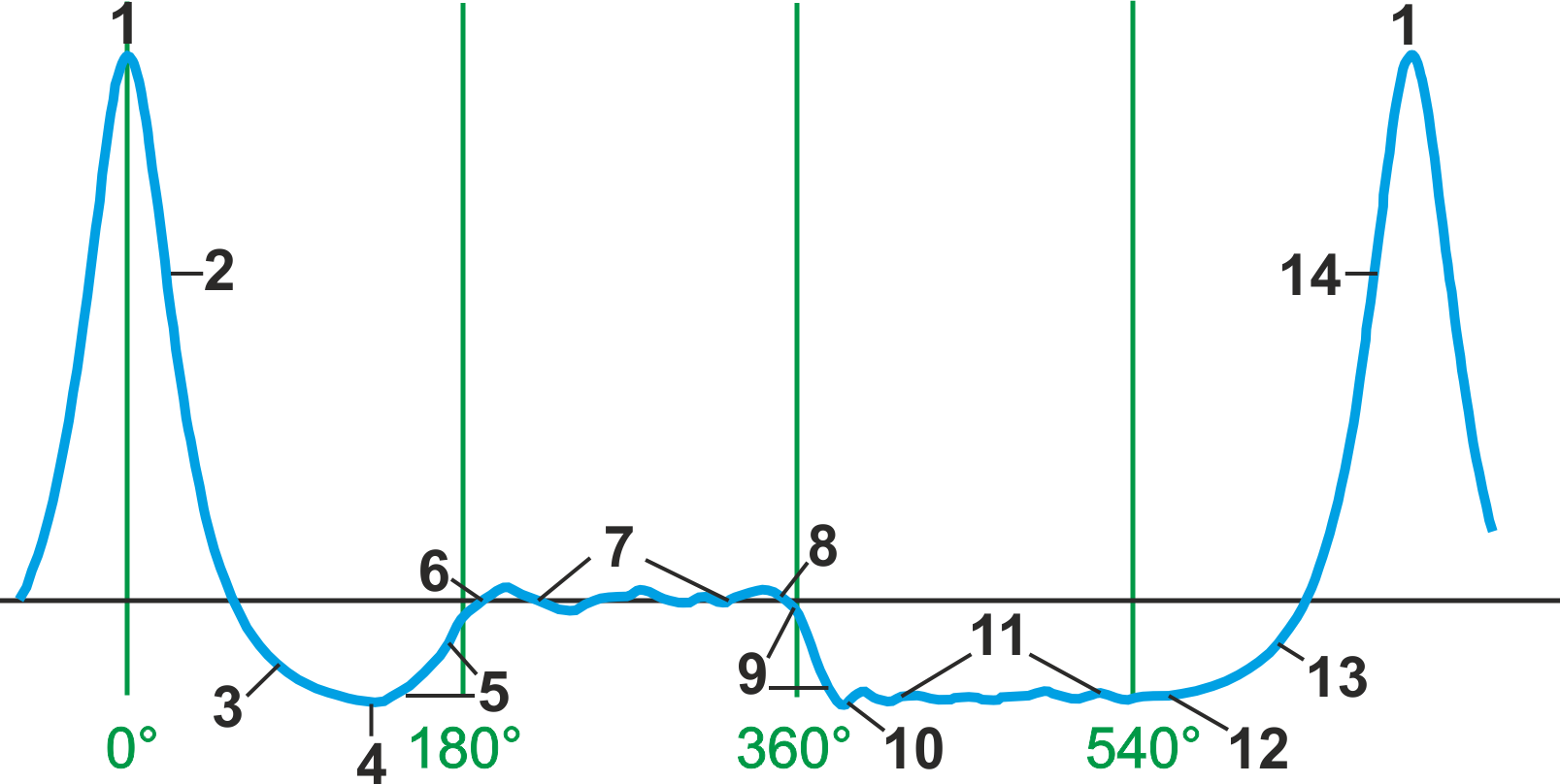 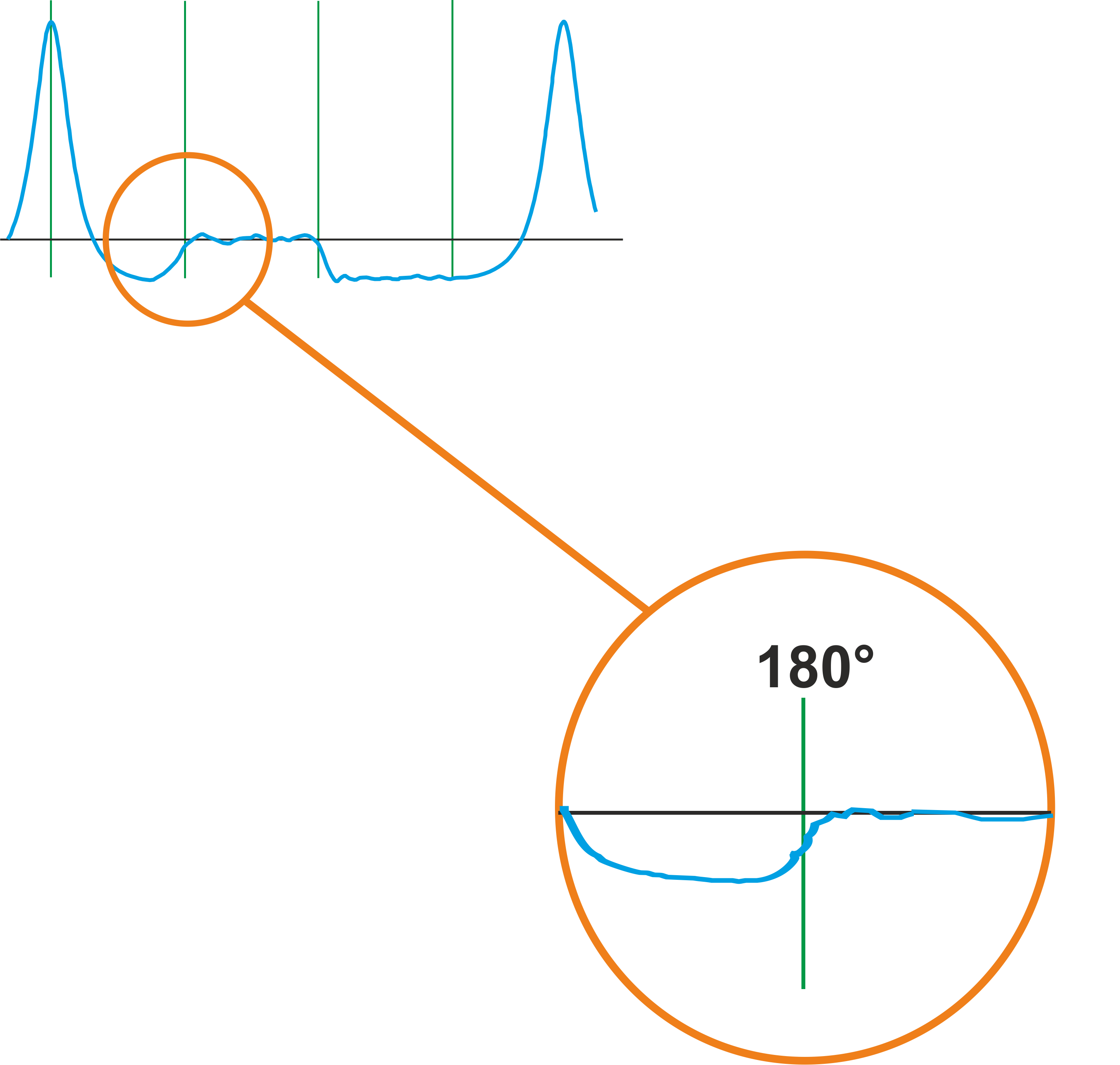 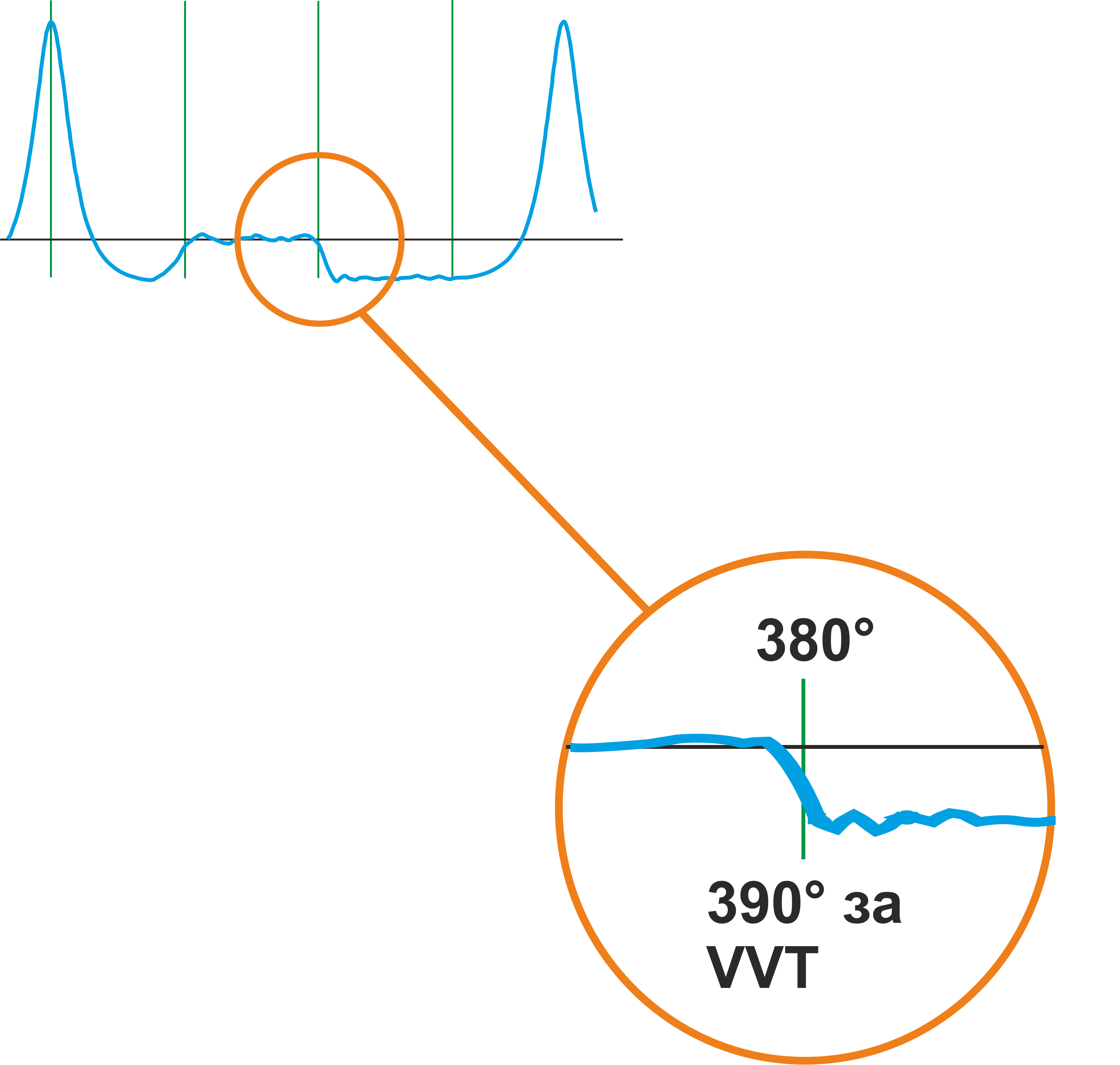